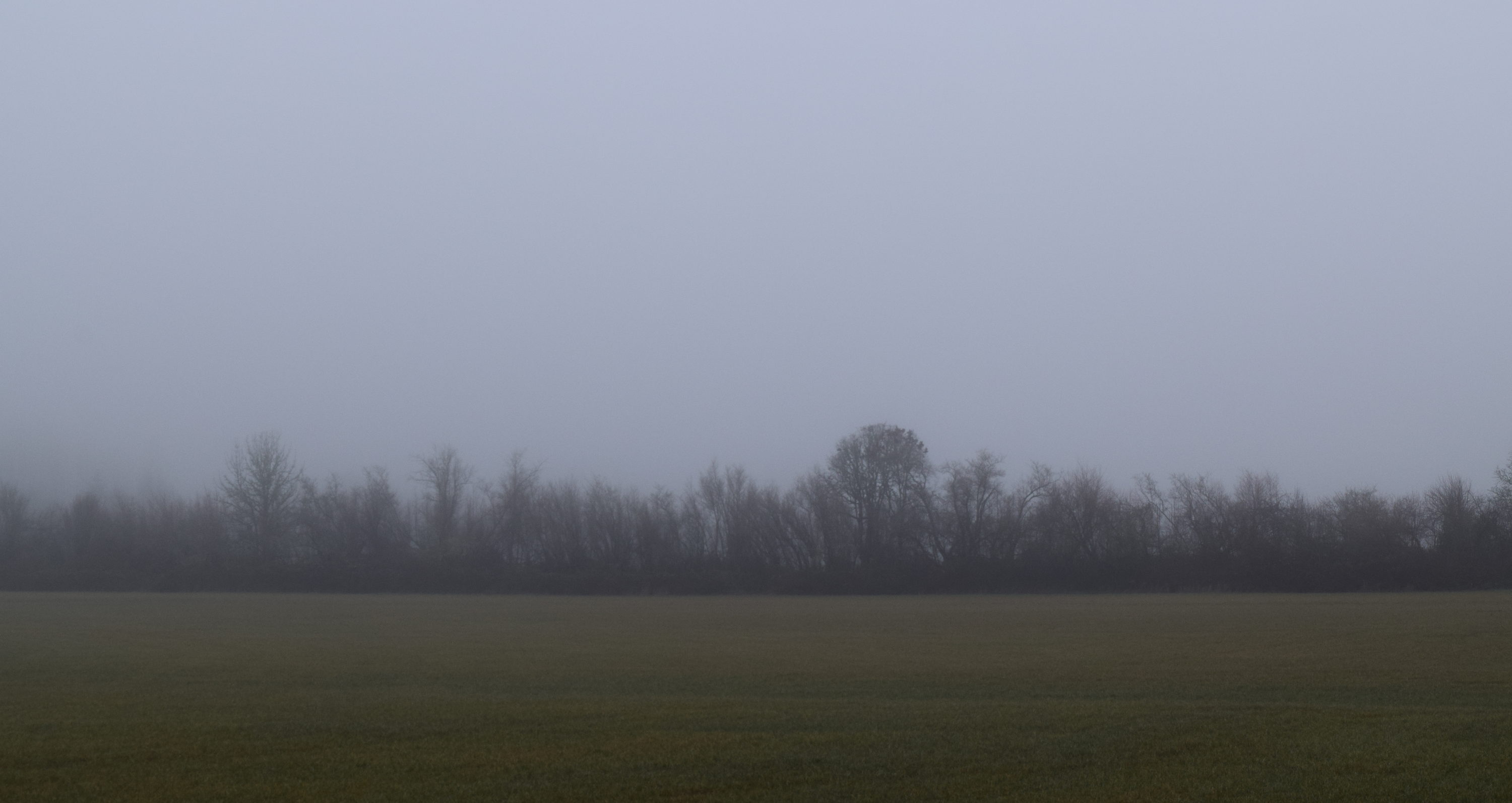 K.’s mom and stepdad have a horse ranch halfway between Corvallis and Albany. It consists of a beautiful horse barn with stables and an arena, a beautiful hay barn, and a poorly-made prefab house. To get to their ranch you take a dirt road, and then turn onto a second dirt road. Their next-door neighbor is a marijuana farm. It’s a field surrounded by razor wire filled with randomly-arranged rusting shipping containers. That’s where they grow the pot. It’s an indoor farm. Other neighbors include hops ranches (in the winter, just a latticework of poles and wires) and hazelnut orchards (filled with stubby, wizened hazelnut trees).

There are ancient, enormous oak trees here and there. Until Westward Expansion the Willamette Valley was “oak savanna,” i.e., rolling grassland with occasional oak trees Most of the old ones have been cut down by now. There are poplars: tall, narrow trees, with the weirdest aspect ratio of any tree I’ve ever seen. They look like telephone poles with branches combed up. There’s a marionberry orchard nearby—marionberries being some sort of weird indigenous Oregon berry.

There’s a family of bobcats in K.’s neighborhood. Her stepdad keeps seeing them. He saw a field full of elks grazing the other day. K. and I saw an elk skeleton driving down from the mountains. At least that’s what I think it was: it was way too big to be a deer, and it had these enormous fins sticking out of the back of its vertebrae, like a cow. There were no legs or skull. Just the skeleton of its abdomen. Totally clean. Totally undisturbed. It must have been shot and cleaned by a hunter.

We ate lunch at the house of a family friend (of mine) who’s a biochemistry professor at Oregon State. His daughter-in-law brought bear sausage. Her father had unexpectedly shot a black bear this fall. I’ve never eaten bear before. The sausage was delicious but I couldn’t taste the bear; it was too disguised (intentionally) by the spices. After lunch, as we were driving up into the mountains, we passed a flock of wild turkeys waddling through a residential neighborhood in Philomath. (Actual name of a town. The daughter-in-law who brought the bear sausage is from there.) I’ve seen plenty of wild turkeys, but these turkeys were big and beautiful. I stopped just to look at them. They were the most beautiful wild turkeys I’ve ever seen.

We drove past a lumber mill. Welcome to the Pacific Northwest.

K. wanted to drive up to Mary’s Peak, which is the highest mountain in the Oregon Coast Range, and is drive-up-able. The road was curvy and windy, not just side-to-side, but up and down. There were ferns, there were giant Douglas firs, there was peaty reddish soil poking out of the road cuts, there was moss dripping off of every branch. Temperate rainforest. Then, all of a sudden, there was two feet of wet snow. Like we just hit the right elevation and the rain turned into snow and the wet ground became covered in snow and there was snow everywhere. We drove up as far as we could, but eventually the Prius refused to go any further, and a couple guys in a truck had to help us push it back onto the road. (They don’t plow the roads up into the mountains in the winter.) So we stopped at a pullout, and there were two dozen SUVs and trucks also parked, and people were frolicking in the snow, and sledding, and building snowman, and building campfires. There was a snow mouse! All around us there were evergreens with their boughs covered in snow, and the sky was just this thick gray fog of snow and water and gray. It was really beautiful, and a dramatic change from the wet rainforest we had been in just a few minutes before.

On the way back we stopped at “Burgerville,” an indigenous Oregon fast food chain. I got a bacon cheeseburger made with Tillamook cheddar—Tillamook being the Oregon dairy cooperative. K. got an eggnog milkshake. I love eggnog but usually find eggnog derivatives gross. This milkshake, though, was so smooth and creamy. It perfectly replicated the taste of eggnog in milkshake form.

Tomorrow we’re going to the coast. On Tuesday, before my red-eye, we are going to a nudist hot springs up in the mountains. K.’s mom, once she heard I was coming, made reservations for their entire family, plus me. Yesterday we went to Portland. I spent an hour in Powell’s. It has an entire section on marijuana, and a huge stack of signed copies of M.’s former colleague’s magnum opus, “The Food Lab.” At S.’s recommendation, I got coffee at the roaster that supplies Bartavelle. We saw a food cart selling Iraqi food. I got coffee from a coffee shop for dogs (“Java Hound”). K. is on some sort of new medication that doesn’t let her drink alcohol, so as a result has been scarfing down pot brownies.

It was foggy in Portland, but not so foggy that we couldn’t see Mount Hood and Mt. St. Helens. Only their tops were visible. They were floating above the city, like detached gods. (In Mt. St. Helens’s case, like a deposed god.) Mt Fuji looks like that from Tokyo, and so does Mt. Rainier from Seattle.

The Willamette River is overflowing and has been inundating low-lying fields everywhere in the valley. In the ground, in the sky: everything is wet, wet, wet.